What True Religion sizes can be found on sizees.com?

True Religion is a company that has been gaining recognition worldwide thanks to the exceptional quality of items of apparel produced, the willingness to follow the newest fashion trends, as well as the motivation to provide the wonderful clothing items to all the customers interested. It is now possible thanks to the True Religion size chart that has been published quite recently and covers all the key categories, including sizes of items of apparel designed with womens, mens, and children in mind. We have to say that even after a brief familiarization with the aforementioned dataset, we were amazed by the sheer amount of thought and planning that went into its development. It is a true masterpiece that does not require any modifications and changes whatsoever. 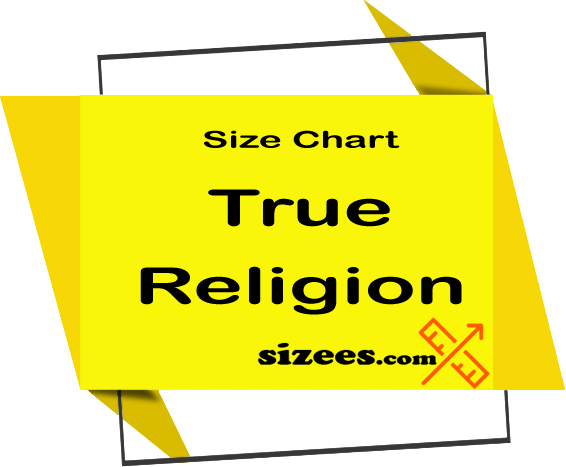 True Religion has opted for the similar division in the case of clothing items for both their male and female customers. The True Religion size chart for men also incorporates the “tops” and “bottoms” section, basing on which one can check whether a given item of apparel in a particular size will be fitting, or there is the necessity to opt for a bigger or smaller product. We think that it is a marvelous idea, especially while taking into account the sheer complexity of the True Religion size chart that can easily dispel all the doubts of male customers interested in refreshing their wardrobe by adding some new interesting items to it, which is fully understandable in our humble opinion. Thanks to the published dataset in question, the task will be simple and straightforward to say at least!

We have to admit that when it comes to the True Religion size chart for women, the distinction that the representatives of the company have come up with is brilliant in its simplicity. It is enough to say that the basic division that has been opted for has been the one distinguishing between female bottoms and tops, with the key sizes provided both in the letter-based format that is so familiar to all the aficionados of regular shopping sessions, as well as in its digit-oriented alternative that allows to quickly and easily juxtapose the prior taken measurements with the content of the dataset published on the website of the company in question and available in all stores in which the goods produced by the brand are available for purchase.

When it comes to the True Religion size chart for children, we have to say that we have been absolutely amazed by the selection that is made available to the parents who would like their children to look stylish while at the same time wearing durable clothes made out of top quality materials. It is enough to say that the representatives of the brand made division into data sets for young girls, boys, toddlers, and infants, so there will be no difficulties with comparing the available measurements the parents have at their disposal with the True Religion size chart appropriate for the age of the child, which we think is an amazing idea that should be followed by the rest of the industry, as it is very sensible and makes shopping remarkably easier.

News in the guide

A useful clothing guide, within the scope of which you will learn how to properly take body measurements and learn interesting facts about pants, fashionable clothes, and the latest clothing trends.

How to clean shoes at home?